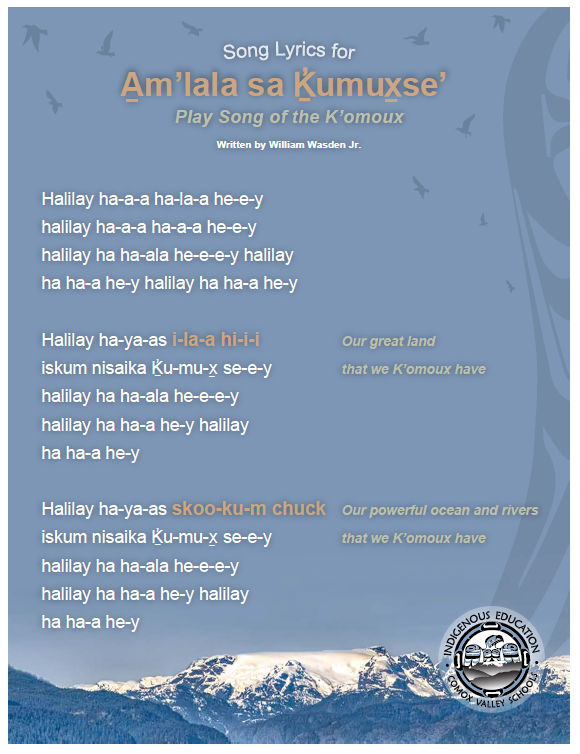 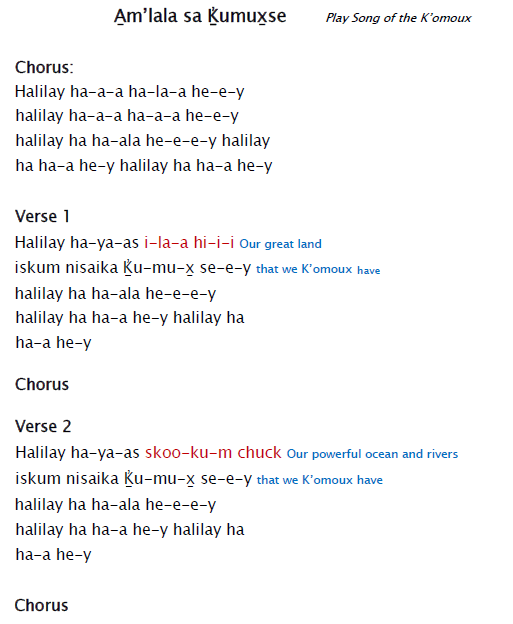 PRINT: For a copy of the above pamphlet click on the images or here.
Song History

A̱m’lala sa Ḵ̓umux̱se’ was created in July 2018 for Indigenous Education (School District 71) to be sung by all students to celebrate Kwakwaka’wakw culture and language. A̱m’lala sa Ḵ̓umux̱se’ translates as 'Play Song of the K’omoux' and speaks to the great land “ila a hii” and the powerful ocean and rivers “skoo kum chuck” that are here within the lands of the K’omoux. The song was released into our School District in a ceremony held during a Professional Development Day on February 15, 2019.

Use of Song Protocols

​William Hiłamas Edward Wasden Jr. Waxawidi “Canoes Come to His Shore” was born at ʼYalis (Alert Bay) British Columbia on October 14, 1967. William is a member of the ‘Namgis Nation “Nimpkish Valley Tribe”. William carries many names and dances that have been bestowed on him by various sides of his families. William is also a descendant of the Cook, Wanukw, Hunt, Alfred, Harris and Innis families. He can also trace his ancestry to the Tłingit of Alaska and the Mowachaht of the West Coast.

William has taught most of his adult life in the majority of schools in the unceded Kwakwaka’wakw territories. He also ventures to share his knowledge of song composition with other nations along the coast.

William continues to teach all that he knows to the next generation of Kwakwaka’wakw. For many years, William has worked at the U’mista Cultural Center at Alert Bay BC as a researcher and cultural advisor. Recently, he has been rehired to return and continue work in language and history documentation for the Kwakwaka’wakw Nation.

For a full printable bio, click on the following link:

PRINT:  Click on the following link for a copy of the lyrics:

Print: for a copy of this invitation click on the following link:

Activity Example
Shannon Tran, Grade 6/7 teacher at Aspen sent the following two activities out to her students.  They emailed responses to the ISW, Ms. Billie, our ISW! Thank you Shannon